What is black ice--and why is it slippery?

Black ice on the roads is what sends cars spinning out of control.  On sidewalks with black ice, pedestrians fall without warning.  So what is "black ice," and how does it form? 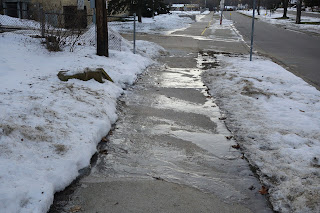 This "black ice" formed by freezing of meltwater.  It looks bright because it's reflecting the sunset.

Black ice is no different from ordinary ice--except that it's more compact and has a smoother surface.  Here's how snow turns to black ice.
Snow consists of feathery, six-sided crystals of ice.  Under some weather conditions, the snowflakes are less branched--instead disk-like or even like pellets.  Feathery crystals make snow fluffy and light--containing mostly air.  Snow made of pellets is far more dense, but there are still pockets of air between pellets.  The amount of air determines whether snow is light or heavy.

Snow is white because the surface is reflective but rough, scattering light in all directions.  Because some of this light bounces back to you, the snow looks white.

After the snow falls it gradually compacts.  Compaction is aided by the weight of snow falling on top. As the ice compacts it gets more granular and less fluffy.  Most of the compaction happens by "recrystalization."  Inside the snow, water molecules move around.  Small crystals of ice get smaller, while large ones grow even larger.  Meanwhile, the many air spaces between flakes merge into fewer bubbles.  With fewer bubbles and crystal edges, light penetrates deeper without bouncing--it becomes more transparent.  This is how snowfall in the mountains becomes the hard, blue ice of glaciers.

When snow falls on pavement, it compacts much faster under the weight of shoes and tires.  When first compacted, it still appears white from light scattered in all directions.  Each tiny crystal or bubble acts like a mirror, but they are pointing in all directions.

Hard-packed snow isn't very slippery because the surface is still rough.  It isn't fully hard, so shoes or tires can get a grip on it.

How does packed snow change to black ice?

With time, the crystals continue to grow in size and bond to one another.   With all the crystals touching and fewer air bubbles, light rays penetrate deeper and don't bounce back to you.  It's more transparent, looks darker.

Big, hard crystals of ice are smoother and more slippery.  Eventually the mass of interlocking crystals becomes quite hard, so shoes and tires can't get a good grip.

The smooth, transparent, hard ice is now what people call "black ice."  Like a mirror, its smooth surface reflects light in one direction.  If the sun reflects your way, you see bright reflections.  If another way, it looks very dark.  It's also dark because you can see partway through to the dark pavement.  Dark ice is what people call "black ice."

Why is ice slippery?

Some scientists say ice skates are slippery because intense pressure from the narrow blade turns the top layer of ice molecules to liquid.  So you are skating on water!  The warmer the ice, the more easily this thin layer of slippery liquid forms.  When ice gets to -70 F, skates and sleds no longer slide.

If you add water to black ice, it gets super slippery!  Very dangerous--especially if it occurs in unpredictable patches, or invisible patches covered with a dusting of new snow.

Years ago, I worked at an office with a long driveway.  The drive was nearly level, but had a slight dip down in the middle.  It was winter--the driveway had been covered with packed snow that wasn't slippery.  One day it began to drizzle rain with the temperature right at freezing.  Reports of slippery roads led the boss to send us home at noon.

It was extremely slippery!  When I got to the bottom of the shallow dip, my car couldn't climb the slightest incline.  Several people tried to push my car, but the pavement was so slippery their shoes couldn't get a purchase--they couldn't apply any force.  They could barely stand without falling down.  Eventually we scattered some sand under the tires and that did the trick.

Black ice this slippery is quite rare.  It can only form at temperatures near freezing.  The water comes from either rain or melting snow and ice.  Beware of rain on packed snow or ice!!  As temperatures drop well below freezing, black ice becomes less slippery.

The importance of clearing packed snow

When ice freezes on a lake, it forms black ice right away.  It looks very dark and it's very smooth and slippery.  You can see through the ice towards the bottom--explaining why it looks dark.  Gradually the ice turns lighter as snow falls and bonds to the surface, making it less transparent.

Black ice can form directly when freezing rain hits pavement chilled to below freezing--similar to ice freezing on a pond.

Most of the time, black ice forms from packed snow.  If the temperature hovers around freezing, this greatly speeds the process as meltwater fills pores in packed snow, then freezes again.  This refreezing also bonds the ice to the pavement.

Soon after if forms, packed snow is easy to remove from pavement.  A sharp shovel or even a broom removes it easily.  Once the packed snow begins to bond with pavement, you can still remove it with an ice scraper.

If you remove most of the packed snow, sunlight can penetrate to heat the pavement.  Then the remaining packed snow will evaporate without needing to melt first.  Evaporation happens in 1-2 sunny days--a bit slower on cloudy days.  It even happens at temperatures below 0 F.

If you use snowplows or snow blowers to remove snow--remember, they usually leave a layer of packed snow.  This has to be removed by a sharp plow blade or by a hand scraper.  People ofter rely on de-icer to remove this packed snow--but the thicker the layer, the less effective the salt.  Packed snow leads to overuse of salt or to hard ice.  Sometimes if the area isn't large, or the snow isn't deep, you can get ice-free pavement faster by hand-shoveling with a snow-plow type shovel.

If you have ice firmly bonded to pavement, you are in trouble.  The next snowfall will be harder to remove from the rough, icy surface underneath.  New snow will bond more quickly to existing ice.  The ice grows thicker with each snowfall.

How to remove black ice

Black ice (or packed snow) reflects the sun.  It won't absorb solar energy so it can't evaporate.  It may remain a hazard all winter.

If you decide to live with the ice, you can sprinkle it with sand.  This works very well to improve traction, and dark sand absorbs a little heat from the sun.  But the bumpiness of uneven ice can be annoying.

You could apply de-icing salt.  This works by breaking the bond of the ice to the pavement, so you have to follow salt by chipping the ice with a scraper.  It's unlikely the salt will melt all the ice in a thick layer, because as the ice melts, it dilutes the salt.

If you use de-icing salt, pay attention to temperature.  Rock salt (NaCl) works poorly at temperatures under 15 F.  Calcium chloride (CaCl2) works to well below zero because it releases heat as it melts, but it's more expensive.  After salting, wait half an hour to an hour before chipping. 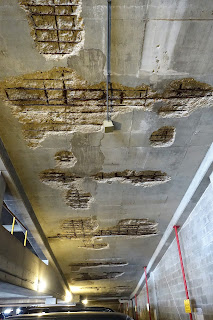 If you use salt regularly, eventually your sidewalk becomes so rough that it's much harder to remove packed snow and ice.  Using salt isn't necessary--it only makes your job harder over time.

At colder temperatures, your can chip ice with an ice scraper. but this is slow and difficult.  If temperatures rise toward freezing with strong sun, it gets easy to chip the ice--a little meltwater forms under the ice, temporarily breaking the bond.

Now you can chip off large chunks of ice, starting at the edge of the mass.   If you push them away from the main ice mass, they melt or evaporate quickly.  Chip a little each day in the early afternoon.  It's best to remove chipped ice with a shovel--but if you don't have time to remove it, chunks of ice will still melt or evaporate faster. Soon the ice will be gone without using salt.

Usually on warm days, water evaporates as the ice melts.  After sundown, any remaining meltwater will refreeze, forming a slippery spot.  One way to prevent pooling of water is to shovel all the way to the grass bordering the pavement.  Water will then drain into the soil.

If it rains on packed snow or black ice, you have to act fast!  Rainwater under the ice breaks the bond with the pavement--now you can easily chip the ice.  But if you allow the ice to freeze again, it will be more slippery and bonded than ever.

Link to viral video of bus sliding on ice.  It's every one's nightmare,  but streets this slippery are rare.

A news story attributed it to "black ice," but doesn't say how it formed.  I'd guess it resulted from snow falling as temperatures dropped from above to below freezing.  At first falling snow melted, then the water froze--but was hidden by the accumulation of more snow.  Beware of these conditions.  Monitor the temperature displayed in your car.

Please feel free to comment on the article above, or on other watershed issues.

Water photo of the Day 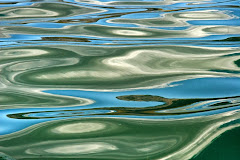 Popular Posts on this blog 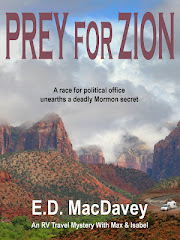 Liz and I recently published our new mystery on Kindle Books. It's about a deadly secret that's uncovered when a Mormon--very much like Mitt Romney--begins a race for political office. We're hoping some of you will read and review it! It's only 99 cents.

Other blogs by David Thompson...